skip to main | skip to sidebar

I realize this blog is dead, but I had top post this somewhere. 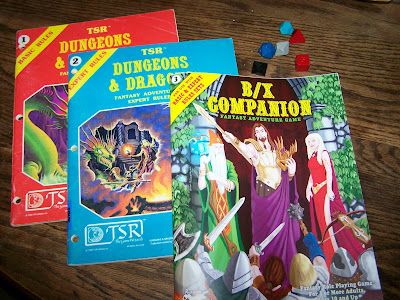 I am the proud owner of the BX Companion. This is a project i have been excited for for quite some time. I started my Old school treck with a BX/ Holmes crossbreed and although I have played much more BECMI, and LL then BX proper i still have a soft place in my heart for the games that got me started.

The first thing I noticed was the resolution of the cover. I'm not sure if it's the printers fault, or a problem with the original file, but it seems a touch blurry, which is a shame with such a beautiful cover piece. Luckily none of the interior art or text suffers from this problem (Becker was not exaggerating about the quality of art in this book, there is some great pieces in it.)

The book starts with a forward and introduction, which I'm sure are nice, but since i was trying to finish reading the book in time to write a review before heading off to work, I skipped it and went straight to the meat.

Companion level classes all get an expanded capabilities. I really like Mr Becker's approach to this. Fighters gain extra attacks, Clerics can turn more HD worth of undead and get extra spells. M-U's gain a bevy of new and powerful spells, and Thieves gain the ability to make traps, preform feats of acrobatics, and a acting / bluffing abilities. these are all nice additions that expand on other capabilities rather then simply improving existing abilities (for the most part.) Demi-humans can improve their combat prowess and saving throws at certain XP points as well. In addition all classes (except for Halfling) can expand their empires to Dominions. All very cool stuff, but as an avid Halfling player I am a little irked that my character will never become a great leader using the Companion rules.


Part three is on spells. I only skimmed this section as I rarely play a MU or cleric in BX.

Chapter 4 is really the most exciting part of the companion to me. Hazardous environments, new hirelings,mass combat, and a variety of optional combat rules. Once again however the Halfing gets the short end of the stick in the class based variable combat section (being grouped with the cleric rather then the fighter like other demi-humans,) but other then that minor gripe this chapter made the the whole book worth the price for me.

The mass combat system looks very nice, although I'll have to go through it in greater detail and digest it a little bit before i am ready to convert from BECMI's systems. However even from the quick once through I gave the section I think it might just make Zack over at RPG Blog II happy.


Part six gives us monsters. There is a lot to love in this chapter, everything from Bandersnatches and Wendigo to Land Sharks and Mutant Giants are given a write up. I really like how Mr Becker wen t out of his way to provide us with classical monsters with some staying power with out copy / pasting from other editions. There isn't one monster that feels like a random assortment of traits with an unspeakable name that plagued AD&D. I can't say enough how much this pleases me.

The treasure section looks pretty standard to me, but like the magic section I mostly skipped past it.

Part 8 was another great chapter. There are rules for what happens when a thief puts on Plate mail (something that was the cause of much irritation when I started playing,) Dwarves crafting magic arms and armor, ruling over Dominions, some great advise on making settings and adventures, and an optional bard class (but no class based damage :))

The book ends with a one page discussion on creating cosmologies and using them in play.

I've got to say all and all the Companion is a marvelous book (despite the Halfling hate,) and is a worthy addition to the BX line (BXC?)

Edit: I probably should have listed the address for the actual books somewhere: http://bxblackrazor.blogspot.com/2010/08/first-print-run-finally-finished.html
Posted by BlUsKrEEm at 1:11 PM 23 comments:

To be honest the only reason this blog exists is because I haven't figured out how to delete it, but there

Haiti has been through a lot of hardships in my life time, but yesterday's quake was the worst in memory. Aid is coming in form the international community, but the scale of the devastation is staggering. The capital is destroyed. There are no hospitals operating in Port-au-Prince. There is no running water. After shocks and quakes are still threatening the lives of survivors. Haiti is the poorest country in the western hemisphere. Millions of people are in need of help. I beg anyone who might read this to please send aid to international relief organizations (Redcross, Unicef)
Posted by BlUsKrEEm at 7:55 AM No comments:

Just a Reminder to the few of you listening to pick up a free copy of Spellcraft & Swordplay Deluxe Ed pdf some time between now and Friday. Spellcraft & Swordplay is an excellent Old School style game that really stands out from it's competition. The game features an equipment based combat and my favorite Spell system on the market. I strongly suggest picking it up. I'm expecting some really great things from Elf lair games in the future.
Posted by BlUsKrEEm at 9:25 PM No comments:

I got my issue of G-fan number #88 yesterday, but haven't had the time to sit down and read it with holiday and game prep activities, so I thought I'd post a link to a article summery from the good folk at Monster Island News

For those of you not aware G-fan is the premeir Kaiju magazine on the market brought to you by Daikaiju Enterprises, the people who bring you G-fest (North America's biggest Kaiju con.) The website is here. At $5 an issue it's the most Kaiju bang you can get for your buck.
Posted by BlUsKrEEm at 1:11 PM No comments:

The Retro-space Race has Begun

You may not be aware, b ut there are several groups working on retro-scifi RPGs. Well, The today the first volley of the Old School Renaissance's space race has been fired. David Bezio (the author of one of my favorite fantasy settings, the Phoenix Barony)has released the play-test edition of "X-Plorers" for free at Lulu. X-plorer's is bills itself as a retro rpg that tries to capture the feel of 70's scifi. Hopefully this news will lead Elf Lair Games and DorkswithDice's to step up their efforts to get "Twelve Parsecs" and "Frontier Space" into the war for the stars.

X-Plorers is set in the year 2000 AD, when the United Corprate Nations rules the massive city wide planet of earth as well as terraformed Venus and Mars. The characters take the rolls of explorers of the frontiers of space.

The system is very simple, and easy to learn by anyone familiar with OD&D, BD&D or their clones. Each character rolls four attributes (Agility, Intelligence, Physique, and Presence,) chooses a class (scientists, soldier, scout, and technician,) copies their save throw, Base-to-hit, and their class skills. Now I know those last two are going scare some people away, but there is no reason for anxiety. Some of you are annoyed by single saves, and ascending to-hits, but I imagine the thing many grognards are already turning their noses up at the word "Skills," however I think they'll be pleasantly surprised if they give it a chance.

Skills are handled similar to the way saves are in most OSR systems in that they are dependent on class and level and are rolled in a similar fashion. Each class has four unique skills that are distinguish the class from the each other(There is an optional rule that allows for the learning of another class's skill but it cost additional XP to advance.)

"X-Plorers" really shines in the ship based combat. Each ship is placed on a linear chart that represents the relative distance between one and another, if a ship moves off the chart they may escape combat. Each round is broken into phases in which a crew member effect combat in a significant way depending on their roll in the ship. I really like this system, and consider it the highlight of the game. My only complaint may be that unlike the other classes the Navigator does not get any options on their phase other than to make a Computer save to give strategic bonuses to the other crew members. Personally I would have preferred if they could choose to add to initiative, or help with a free escape on the following round.

The creature section was a tad small for my tastes, but it does feature a rather extensive alien creation system. Still I hope the final version does have a few more premade critters.

All in all after my first read thru I am quite happy with X-Plorers.
Posted by BlUsKrEEm at 8:39 PM 6 comments:

After following over a hundred blogs on gaming, movies, comics and pretty much anything else that catches my fancy I've decided it's my turn to dip my toe in the blogo-sphere. I've decided to make this blog about two of the three topics I'm passionate about. Kaiju, and Role playing (the third passion of course being my finance, who might on occasionally say a word or two about.)